Skip to main content
This insider documentary package chronicles the efforts of whistleblower Ralph Moss to expose a major cancer research center's attempt during the 1970s to conceal the true effectiveness of laetrile, an experimental, low-cost cancer drug. 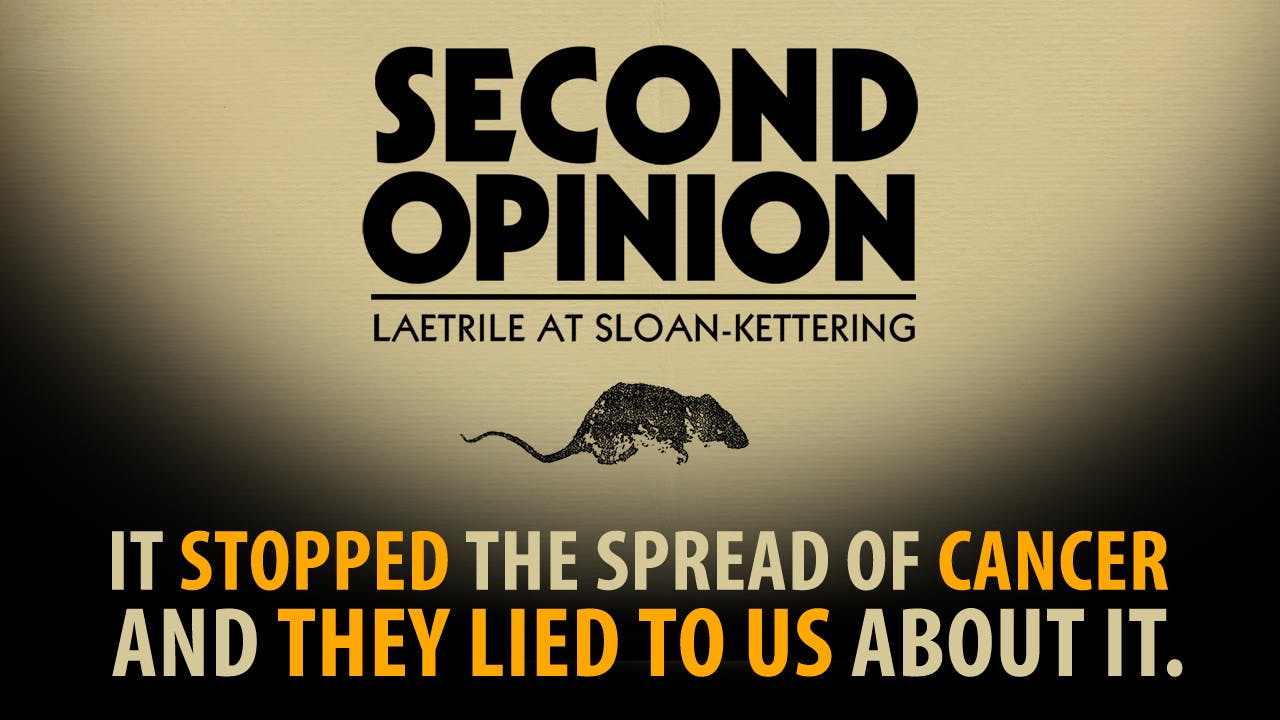 The War On Cancer, launched in the early 1970s, set the stage for a massive influx of new ideas in fighting the disease of cancer. Memorial Sloan-Kettering Cancer Center, America's leading cancer research center at the time, was assigned the task of testing an unconventional therapy called "Laetrile" in an effort to curb the public's "false hope" in the alleged "quack" therapy.

Ralph W. Moss PhD, a young and eager science writer, was hired by Sloan-Kettering's public relations department in 1974 to help brief the American public on the center's contribution to the War On Cancer. One of his first assignments was to write a biography about Dr. Kanematsu Sugiura, one of the Center's oldest and leading research scientists as well as the original co-inventor of chemotherapy. While meeting with this iconic scientist to pen a biography on his 60-year career at Sloan-Kettering, Moss discovered that Sugiura had been studying this "quack remedy"  in laboratory mice, and with unexpectedly positive results. Shocked and bewildered, Moss reported back to his superiors what he had discovered, only to be met with backlash and denial from Sloan-Kettering's leaders on what their own leading scientist had found.

Fueled by respect and admiration for Sugiura—Ralph W. Moss attempted to publicize  the truth about Sugiura's findings. And after all diplomatic approaches failed, Moss lived  a double life, working as a loyal employee at Sloan-Kettering while also recruiting fellow employees to help anonymously leak this information to the American public- through a newly formed underground organization they called-"Second Opinion".

What comes with this package:

The 76-minute feature documentary plus 13 chapters of added material:

• Ch. 1: Coley's Toxins: Laetrile wasn't the only unconventional therapy being investigated at Sloan-Kettering at this time. They were also investigating Coley's Toxins, which is now an accepted form of therapy, even though no one can get it.

• Ch. 2: Cat & Mouse Game: After Ralph W. Moss, PhD published his book "The Cancer Industry", Ralph discloses how the American Cancer Society tried to "buy him off" to pull his book from the market.

• Ch. 4: The Human Trials: "The FDA, and The National Cancer Society didn't trust Sloan-Kettering to host these clinical trials, there was too much of a chance they would turn out positive, so they got the nation's leading Laetrile opponent to host the human trials. These trials were set up to fail."

• Ch. 5: Just Another Fraud: "Everyone should know that the "war on cancer" is largely a fraud, and that the National Cancer Institute and American Cancer Society are derelict in their duties to the people who support them." - Linus Pauling, biochemist and the only solo winner of two Nobel Prizes in history.

• Ch. 6: The First Raid: When Laetrile use began reaching its height in the USA, the Food & Drug Administration (FDA) began raiding manufacturing facilities and clinics that were making or dispensing the substance. The FDA and News organizations worked in concert to broadcast the first Laetrile raid on US soil.

• Ch. 7: Laetrile as the Bogeyman: "Once Laetrile began to gain traction, even if found to be ineffective, everyone agreed that it was non-toxic. So the establishment re-branded Laetrile as a toxic drug to try to sway the public from seeking it."

• Ch. 8: Laetrile vs. Amygdalin vs. B17: Even today, there is much confusion over what the differences are, this short film discloses how the three names for Laetrile came to be.

• Ch. 9: Dr. Sugiura: A biographical history of Dr. Kanematsu Sugiura, who was a co-inventor of chemotherapy and was the lead scientist in the Laetrile studies at Sloan-Kettering.

• Ch. 10: Out of the Asylum: Ralph W. Moss, PhD talks about co-founding the formation of the USA's National Institutes of Health's (NIH) "Office of Alternative Medicine", where Ralph served on the advisory board for 10 years.

• Ch. 11: Hyperthermia & Integration: Originally inspired by "Coley's Toxins", "Hyperthermia" when integrated with certain types of traditional therapies shows double the effectiveness and double the survival rates in randomized clinical trials. The USA's NIH pulled all funding from the leading research center (Duke, NC) to keep it from reaching the American market. Ralph W. Moss also discusses the future of cancer therapy and the inevitable integration with conventional and non-conventional therapies.

• Ch. 12: In Conclusion: Ralph W. Moss, PhD discusses how the industry has evolved since the birth of the War On Cancer.

• Ch. 13: Laetrile: Moving Forward: On August 19, 2014 the Germans have published a ground-breaking new study on Laetrile/Amygdalin and plan on opening up human clinical trials.